This diagram is very nice. Remember you can do it once per turn (not round!): 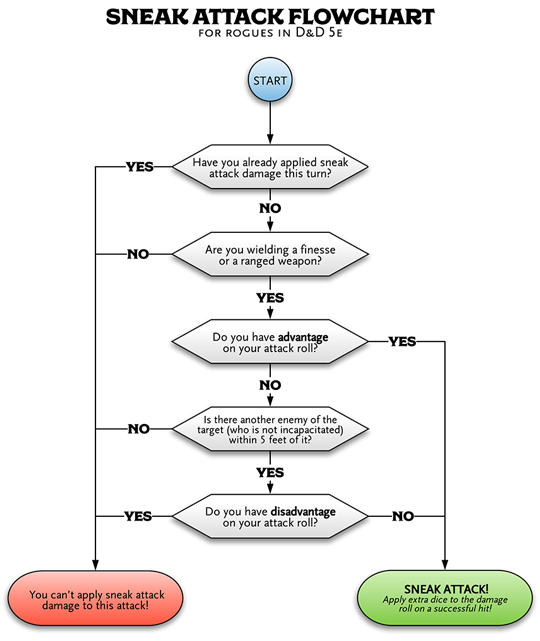 1. Your MOVE will get you where you need to be (before, after, or in between the rest of your actions).

2. Your ACTION will typically be for attack.

3. Your BONUS ACTION can be used defensively or offensively.

4. Your REACTION can also be used defensively or offensively.

3. Learn how to get advantage.

The standard proactive method is to attack while hidden, but there’s more. There’s a list here, and another one here, including useful Rogue tips. But, even one source of disadvantage cancels advantage, and 5e is a bit… loose. Your DM may be more or less liberal with applying ad hoc disadvantage on rolls. So if that happens a lot in your game, the only reliable way to get sneak attack is to coordinate with your allies, and attack foes who are already engaged in melee combat with one of your buddies. (It’s a still a lot better than the 3.5/Pathfinder flanking requirement.)

Skills are awesome, embrace them. :p

[originally published by Rogue on tumblr]